Deprecated: implode(): Passing glue string after array is deprecated. Swap the parameters in /home/customer/www/yeswecan.scot/public_html/plugins/content/jw_allvideos/jw_allvideos.php on line 72 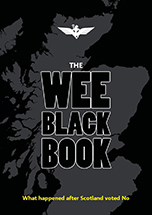 After months of misinformation and scaremongering from the 'Better Together' campaign, the promise of 'near Federalism' or 'Home Rule' was their last-ditch attempt at securing a NO vote in the Scottish Independence Referendum.

On the day of the vote, these promises and assurances were believed by 55% of Scots who rejected the question: "Should Scotland become an independent country" and voted NO.

So where is the promised "Home Rule"? What about all the scare stories that assured us that Scotland would crash and burn as an independent country? What about the protections we would enjoy for jobs, welfare and the Health Service if we remained as a part of the UK?

The Wee Black Book answers many of these questions and debunks the myths created and propagated by the agenda of the UK establishment.

The projected date for Scotland to have officially become an independent nation in the event of a YES vote was the 24th of March 2016. The "Wee Black Book" was published on that date, in order to record the consequences of Scotland’s choice.

If you experience problems with IE, you might consider downloading and installing an alternative browser (Firefox would be a good choice - you can get it here: www.mozilla.org/firefox-download).

This link will open the flip book in a new window which can be maximised, improving the visual quality in IE: The Wee Black Book - Full Screen

You can view/save the original .pdf file here: The Wee Black Book pdf

On a desktop machine, there is a menu bar along the top that shows the current page. On the bar, there are four menu buttons. The first activates a search tool (which finds info from the publication), the second toggles a set of navigation thumbnails below the pages, the third activates an additional menu bar along the bottom and the fourth toggles the full-screen mode (which makes the text nice and clear).

On a desktop system, the mouse-wheel can be used to advance or retard the pages, as can clicking on the navigation bars. Double-clicking on the page area will zoom in or out of the page.

On a mobile device, the interface is different, but easy to figure out. The pages still turn, and are responsive to taps and swipes. The full screen version will adjust to single-page mode and is easy to read if you turn your device to the portrait orientation.