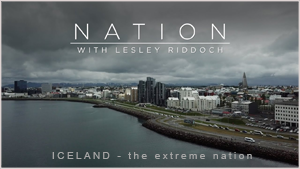 The second in a series of films with Lesley Riddoch exploring Scotland's inspiring northern European neighbours and what we can learn.

Despite being a sub-arctic island pulsating with potentially catastrophic volcanoes, Iceland's population (334,000 or Aberdeen and Dundee combined) has managed to become one of the most successful societies on earth.

To understand the Icelander's attitude to risk and creating a positive from the bleakest situation means understanding the volcanic landscape that has shaped this nation and its fortunes. We look at how Iceland has harnessed the power beneath their feet, created a successful media industry by exploiting its lunar setting, how the land has shaped the island's politics and more.

The seismic global crash (and subsequent volcanic explosion) could have brought Iceland to its knees but, in fact, regenerated the country - empowering it to become a globally recognised, more sustainable, politically engaged nation with a future that looks brighter than ever.

Iceland certainly puts any doubts about Scotland's huge potential in perspective as the UK and Europe's political tectonic plates continue to shift.

This production is the first in a series of documentaries that examine the fortunes of our Nordic neighbours. The ambition of the series is to demonstrate how other small nations have addressed their desire to be independent, working in harmony with like-minded nations in the region.

This is a joint venture by Lesley Riddoch and Phantom Power Films.

This film demonstrates the talent we have in the new wave of independent film producers, inspired by the potential of Scottish Independence.