Deprecated: implode(): Passing glue string after array is deprecated. Swap the parameters in /home/customer/www/yeswecan.scot/public_html/plugins/content/jw_allvideos/jw_allvideos.php on line 72

Hydraulic fracturing or, as it is commonly called, fracking, is a technique used for accessing natural gas and oil in tight geologic formations.

The process involves the horizontal directional drilling of wells in addition to the use of water, sand and chemicals at high pressures to fracture rock and release hydrocarbons. It has recently gained public awareness with the on-going discussions concerning natural gas extraction from shale.

Fracking has also been used over a number of years to claim additional oil from depleted reserves in the North Sea. 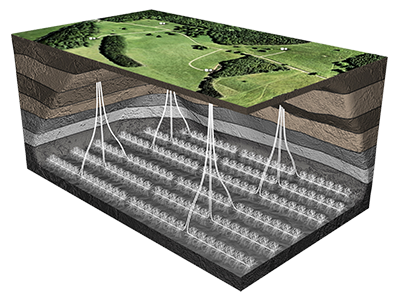 The hydraulic fracturing process can be categorised into the following four steps:

Water and sand make up 98 to 99.5 percent of the fluid used in hydraulic fracturing. In addition, chemical additives are used but the exact formulation varies depending on the well.

Due to the decrease in the costs of fracking and advances in the production process, oil and natural gas that were previously unrecoverable are now accessible. This has led to an increase in supply of both oil and gas in the world market and has meant greater energy independence for countries (such as the United States) that can now access an abundance of these resources.

The development of fracking has been controversial due to environmental concerns. The process typically requires 11 million litres of water per well, which is up to 100 times more than traditional extraction methods.1 This varies greatly depending on the geologic properties of the well.

Other environmental concerns include contamination of ground water, depletion of fresh water, atmospheric pollution and surface pollution in the drilling process. There are also concerns linking fracking to enhanced seismic activity.

The following video explains the basic principles of hydraulic fracturing and highlights some of the concerns related to the technology.