The call for a Second Independence Referendum 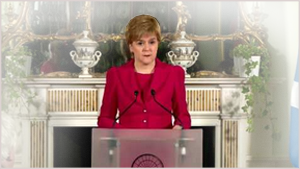 The European Union Referendum held on the 23rd June 2016 resulted in a majority of 52% to leave the EU. Scotland saw things differently as every Scottish constituency voted to remain in the EU - resulting in a final majority of 62%.

The vote was UK wide and, because of the vastly greater number of voters in England, the UK 52% majority to leave swamped Scotland's 62% vote to remain. Effectively, Scotland was forced to comply with the UK result to leave the EU.

However, during the 2014 independence referendum, Scots were told that a vote for independence was guaranteed to remove Scotland from the EU. Conversely, a vote to stay in the UK would ensure Scotland would always continue to enjoy membership in the EU. This assurance was a powerful influence on the way many Scots voted - so much so, the closely contested result was a win for the NO side (to remain in the UK).

In a manifesto commitment, Conservative leader, David Cameron gave an assurance that he would hold a referendum on EU membership in 2016 if his party should form the next UK government. After his successful election, this was held on 23rd June.

Earlier that year in the run up to the May Scottish Elections, Nicola Sturgeon promised an SNP manifesto commitment that stated she would call for another Scottish Independent Referendum if the result of the EU referendum caused a "material change" from what was assured in the 2014 referendum. This "material change" would exist if Scotland should end up in a position where the UK pulled Scotland out of the EU against her will.

This is exactly what happened.

In a surprise move, Nicola Sturgeon, First Minister of Scotland called a Press Conference at Bute House, Edinburgh to announce the call for a Second Referendum on Scottish Independence.